“It felt almost like half of a player. His actions were as beneficial as my own (to some extent) and did not feel like a pet or random npc that you'd usually ignore.”

Along with Dr. Foaad Khosmood, I extended the work of a previous Master's student who created a framework for integrating a companion character that mimics the player's behavior into a video game. I built off this work to develop a companion that predicts the future state of the video game in order to identify which of its available actions would be the most "complementary" to the player's current action and overall strategy (predicted future actions). The game we used to test the framework is a simple tower defense game called "Lord of Towers," where the player and their companion move around the map protecting their base from waves of enemies (see screenshot below). 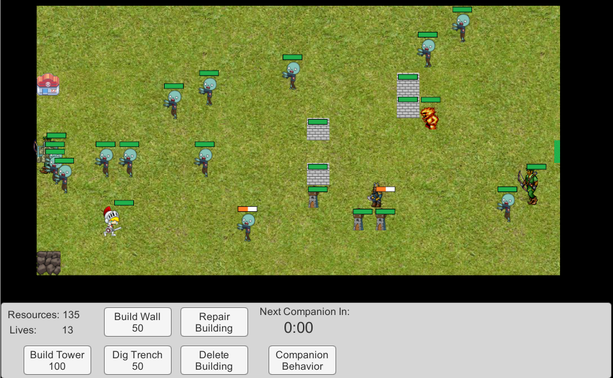 The companion identifies the effects its actions will have on the game state as well as predicts the player's future actions and any upcoming impediments to those actions that it could help to avoid. The code controlling the companion was kept separate from the video game, allowing it to be used as a general framework and applied to other games. A flowchart showing a simplified version of this process is included below, and a video of the "future action simulation" portion of the process is available here (although it's not the most-clear video). 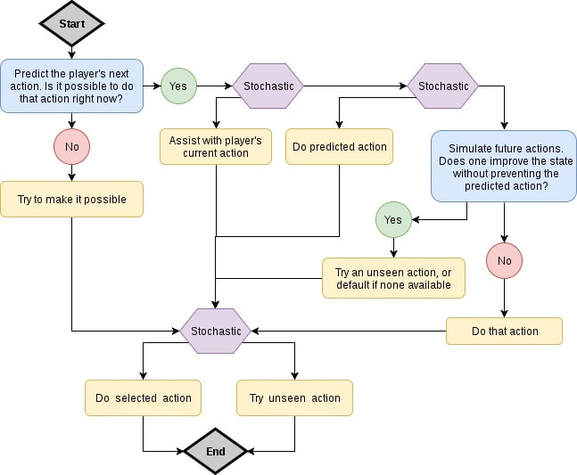 To evaluate its success we had a class of game-development students play the game and provide feedback, most of which was positive. Notably, some students even mentioned that the companion acted how they would expect another human to act.

The paper is archived through the university, and a shortened version will be published in AAAI's 2018 Spring Symposium: "Symposium on Integrating Representation, Reasoning, Learning, and Execution for Goal Directed Autonomy".

Links to download the paper can be found below.
Link to Paper in Cal Poly Digital Commons
​Link to Google Scholar Profile
Direct PDF Link